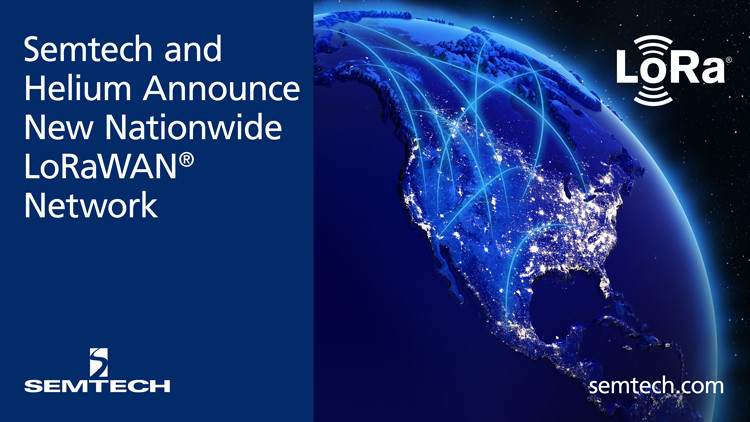 CAMARILLO, Calif., Mar. 5, 2020 – Semtech Corporation (Nasdaq: SMTC), a leading supplier of high performance analog and mixed-signal semiconductors and advanced algorithms, is collaborating with Helium, the company behind one the world’s first peer-to-peer wireless networks, in its efforts to develop one of the largest LoRa-based networks in North America. The Helium network is now fully compatible with the LoRaWAN® protocol and available to the LoRa community of more than 8,000 active software developers.

“We are thrilled to work with Semtech and integrate the LoRaWAN protocol into our LongFi architecture to extend the reach of the Helium network,” said Amir Haleem, Helium’s CEO and co-founder. “The combination of our technologies and platforms provides the LoRa developer community with new opportunities to create new IoT solutions for both businesses and consumers.”

The Helium Hotspot is a new hardware device that enables anyone to own and operate a wireless network for IoT. With Helium’s own open-sourced blockchain technology, individuals are incentivized to deploy Helium Hotspots, which simultaneously mine cryptocurrency and provide LoRaWAN network coverage for hundreds of square miles.

Helium’s network, introduced in Q4 2019, is available in over 745 U.S. cities with major markets throughout the nation, including New York, Los Angeles, Chicago, San Francisco, Miami, and Austin.

“With Helium’s commitment to using Semtech’s LoRa devices and the LoRaWAN protocol, the massive deployment of a LoRaWAN-based network in the U.S. is becoming a reality,” said Marc Pegulu, Vice President of Internet of Things (IoT) for Semtech’s Wireless and Sensing Products Group. “Helium’s model is highly innovative and not only incentivizes consumers to own and operate a piece of the network, but also reinforces a commitment to open-source architecture using the LoRaWAN protocol designed to change the game for LoRa developers.”

Combining Semtech’s LoRa devices with Helium’s distributed, open-source approach to building a ubiquitous network allows any manufacturer, developer or application to utilize LoRaWAN compatible technology to connect devices across the nation. There are over 4,300 Helium Hotspots sold to date since nationwide shipping started in October 2019 and that number is growing.

Co-founded by Shawn Fanning and Amir Haleem in 2013, Helium is building the world’s first peer-to-peer wireless network to simplify connecting devices to the internet by rewarding anyone to become a network operator. CEO Amir Haleem comes from an extensive background in triple-A video games. Helium is backed by GV (formerly Google Ventures), Khosla Ventures, Union Square Ventures, Multicoin Capital, FirstMark, Marc Benioff, Shawn Fanning and other top VCs. The network is live in more than 745 cities throughout the nation and counting. More information can be found at helium.com.

Semtech Corporation is a leading supplier of high-performance analog and mixed-signal semiconductors and advanced algorithms for high-end consumer, enterprise computing, communications, and industrial equipment. Products are designed to benefit the engineering community as well as the global community. The Company is dedicated to reducing the impact it, and its products, have on the environment. Internal green programs seek to reduce waste through material and manufacturing control, use of green technology and designing for resource reduction. Publicly traded since 1967, Semtech is listed on the Nasdaq Global Select Market under the symbol SMTC. For more information, visit www.semtech.com.

Semtech, the Semtech logo and LoRa are registered trademarks or service marks of Semtech Corporation or its affiliates.